MIC Food | The Diversity of Hispanic Cuisine, from Mexico to the Patagonia
For many not familiar with the diversity of the Hispanic culture, it might not be as easy to detect the differences in cuisine from one region to another.
hispanic, cuisine, hispanic cuisine, mexico, patagonia, hispanic, mexican, food, fare, culture, tradition, latin
18565
post-template-default,single,single-post,postid-18565,single-format-standard,ajax_fade,page_not_loaded,,hide_top_bar_on_mobile_header,qode-theme-ver-14.1,qode-theme-bridge,disabled_footer_bottom,wpb-js-composer js-comp-ver-5.4.7,vc_responsive,mob-menu-slideout-over

The Diversity of Hispanic Cuisine, from Mexico to the Patagonia 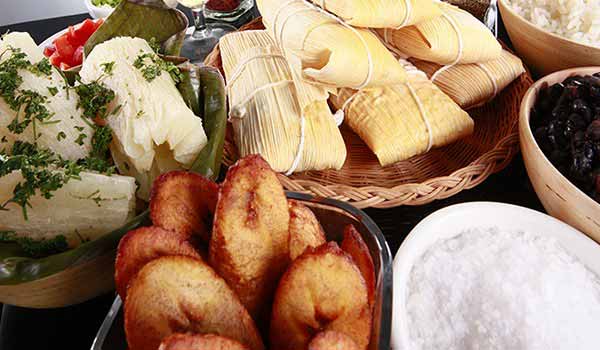 18 Oct The Diversity of Hispanic Cuisine, from Mexico to the Patagonia

This year’s Hispanic Heritage Month, celebrated annually in the United States from September 15 to October 15, is a perfect opportunity to explore the diversity of Hispanic cuisine. From Mexico to Central America, from the Caribbean to Northern and Southern South America, we celebrate the histories, cultures and contributions of American citizens whose ancestors came from those places. While a basic common language unites those cultures, the diversity within their customs, ethnicity, regional lingo– and their food– is quite broad.

For many not familiar with the diversity of the Hispanic culture, it might not be as easy to detect the differences in cuisine from one region to another. Given that about 63% of Hispanics in this country are of Mexican descent, many people assume that Hispanic cuisine equals Mexican cuisine, but that is far from the truth.

The most prevalent “Hispanic” cuisine in the United States is Mexican food and its Tex-Mex extensions. Despite basic menu items such as tortilla chips, salsa, tacos and quesadillas, Mexican cuisine is diverse, with different ingredients and flavors depending on the region of Mexico it represents. Typical foods range from beef, Spanish rice, refried beans, flour tortillas and burritos in Northern Mexico, to seafood, paella and salads in Baja California and the Pacific coast, to chicken based dishes, corn tortillas, a variety of chile peppers and tropical fruits and vegetables in the south, to pork dishes, root vegetables such as yuca, and indigenous plants like achiote and chaya in the Yucatan peninsula. In general, Mexican food tends to be spicy, with chile-based sauces for pork and chicken dishes. The heat is tamed with additional menu items such as tortillas at every meal, corn-based dishes, yellow rice, refried beans, corn-based tamales, avocados, pico de gallo, lime and milk-based desserts such as flan.

Moving down to Central America, food becomes milder. Pork and chicken dishes continue to be prevalent, along with chorizo. Beans are small and red in color and are most often served whole instead of refried, and white rice is typically served instead of yellow. Staples, such as tortillas and ripe plantains are commonly served as side items in every meal, including breakfast. Other indigenous roots like yuca and sweet potatoes are served as accompaniments, and tropical fruits including mangos, papaya, tamarind and pineapple are plentiful.

The Caribbean (Cuba, Puerto Rico and the Dominican Republic)

Shifting over to the Caribbean, seafood dishes become more common in addition to the pork and chicken proteins served in the rest of the Hispanic cultures. White rice is served most often, but beans are more often black instead of red. Green plantains served as tostones and mofongo are on the menu almost daily, and are commonly used as the base for tamales instead of corn. The Caribbean culture derives flavor from garlic and herbs such as cilantro rather than from chile peppers. Tropical fruits like mangos, papaya, soursop and guava are common staples, not only served fresh, but also as the base for sauces and beverages.

In these countries, beef is often served as the main protein in addition to chicken and pork. Seafood dishes are also prevalent, especially in the coastal areas of Peru and Ecuador, where ceviche-style dishes are common. Vegetables such as bell peppers, onions, tomatoes and garlic (often referred together as “sofrito”) are the seasoning base for many dishes and recipes. White rice is still a staple, and black beans are prevalent. Main meals are frequently accompanied by ripe and green plantains, which are plentiful in this region. Arepas, made of cornmeal, accompany meals in Venezuela and Colombia, and corn and potatoes of many varieties, including boniato, are prevalent in Ecuador and Peru. Different varieties of both sweet and spicy peppers are used in foods, as well as an array of tropical fruits and berries in sauces, desserts and beverages.

With the two highest per capita consumption of beef in the world, Argentina and Uruguay are known for their beef, with products such as steak, ribs, chorizo and sweetbreads prominent in their typical cuisine. Neighboring Paraguay is not far behind, where barbeque is also the preferred cooking method for their beef and chicken dishes, and mandioca (yuca) is served as a side dish almost daily. In the Patagonia, the southernmost region of Argentina, lamb and goat are eaten more frequently than beef. Seafood dishes also abound in Argentina and Chile, with large coastal borders along the Atlantic and Pacific Oceans, respectively. The vast European influence of this region has resulted in the popularity of pasta dishes and baked goods like empanadas filled with eggs, beef, chicken and cheese, as well as their variation of the milk-based dessert dulce de leche. Legumes including chickpeas and pumpkin are popular, as is olive oil and fruits like apples, grapes and peaches, which are more common to the subtropical and temperate climates of this region.

No conversation about the culinary world of South America is complete without mentioning the wonderful wines of both Chile and Argentina. The fertile areas south of Santiago starting with Maipo Valley, Colchagua Valley, all the way to the Maule Valley make for superb red wines, including some wonderful Cabernets and Carmenière blends. In Argentina, the Mendoza region, at the eastern foot of the Andes Mountains, is home to three-quarters of the wine production in that country and to Argentina’s most famous grape variety, the Malbec.

The rich diversity of Hispanic cuisine opens up a world of possibilities when cultivating Hispanic-inspired menus during this month of celebration and throughout the year. Whether inspiration is drawn from North, Central or South America, there are plenty of flavors and interesting menu items to be discovered. Exploring some of the varied flavors of this abundant cuisine is a sure way to keep your menu fun, exciting and fresh. For menu item and recipe ideas, click here.